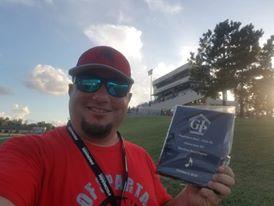 Mr. Nelson is a graduate of the University of Houston where he received a Bachelor of Music Degree in 2004.

Mr. Nelson has been teaching since 2004 and the Assistant Director and Percussion Coordinator for the Porter High School Spartan Band since 2015 where he instructs the PHS Drum Line, Symphonic Band, and works with the Woodridge Forest and White Oak Middle School Band Programs.  From 2011-2015, Mr. Nelson served as Assistant Director and Percussion Coordinator at Shepherd High School in Shepherd, Texas where he led the SHS Indoor Drum Line to a Bronze Medal in the Texas Color Guard Circuit State Championships in 2013, a Gold Medal in 2014, and a Silver Medal in 2015.  Prior to his position in Shepherd, he held similar positions at Sealy High School (2009-2011), Clear Springs High School (2007-2009), and J. Frank Dobie High School (2004-2007).  He is an active clinician and has worked with numerous ensembles in and around the Greater Houston Area and The State of Texas.

Mr. Nelson has lived in Porter, Texas since 2013 with his wife Lindsey and three son’s Carsten, Case and Brody.